Skip to content
Posted inTech Support Tips
Posted by By TechSavvy ZoeSquad May 19, 2022 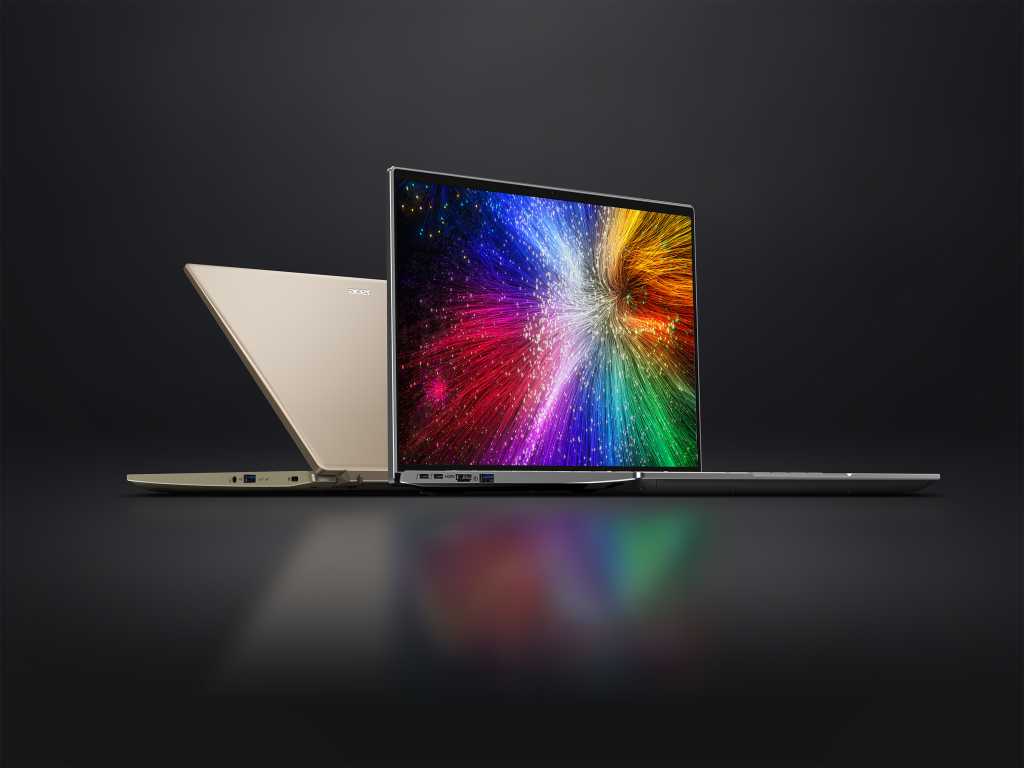 You may have to rethink how you view Acer’s Swift and Aspire laptops. Today, Acer announced refreshes of both lines that include, believe it or not, gaming-class hardware.

In fact, Acer announced a sweeping refresh of its entire laptop fleet, including the Swift 3 OLED, a new Aspire 5, and many new entries in Acer’s eco-friendly Vero lineup, too. The company made the announcements in conjunction with its [email protected] event, held virtually.

Just two years ago, we called Acer’s Swift 3 underpowered, with performance that was frankly disappointing. It’s hard to imagine that will be the case now that Acer has responded with the Swift 3 OLED, featuring four 12th-gen Core-H options, ranging from the Core i5-12450H on up to the Core i7-12700H. Intel launched the 12th-gen Core H processors earlier this year, touting them as the “world’s best gaming platform.”

The Swift 3 is an Intel Evo laptop, meaning it carries with it certain characteristics: a light weight (3.09 pounds), Intel’s Killer Wi-Fi 6E, and up to 10 hours of battery life. (A 30-minute quick charge will yield four hours of battery life.) You’ll be able to buy Acer’s Swift 3 OLED for as little as $899, beginning in July.

Acer’s Aspire lineup consistently appears among Amazon’s low-priced offerings, perhaps giving the impression that these large-screen laptops are only intended for budget buyers. But we’re seeing a version that would seem to bely that: the Aspire 5 A514-55 and the A514-55G, which ship with a range of either Intel’s new “P” (performance) class 12th-gen Core chips, or U options, both ranging from Core i3 processors to a Core i7.

All but one of the new Aspire models will use Intel’s Core processors. The A515-47 will offer the choice of a Ryzen 3 5425U, a Ryzen 5 525U, or a Ryzen 7 5825U and Radeon graphics. Unfortunately, Acer didn’t provide any pricing information for the new Aspires.

Acer’s Spin 5 has traditionally offered somewhat of a middle ground. As the name suggests, Acer’s Spin series reflects the fact that they’re all 360-degree convertibles, which tend to offer slightly less performance than a traditional clamshell. Acer announced a new Spin 3 (the SP314-55 / SP314-55N) and the Spin 5 (SP514-51N). They, too, offer a mix of 12th-gen Core chips, with up to 16GB of LPDDR5 memory and up to 1TB of PCIe Gen4 NVMe SSDs.

Acer’s Vero lineup tries to reuse plastic and other industrial materials that would normally end up in a landfill. Vero models use 30 percent post-consumer recycled (PCR) plastic inside the chassis, according to Acer, and the PCR plastic is also found in the screen bezel and keycaps. Vero notebooks are also deliberately designed with screws in the bottom of the chassis to allow the SSD and memory to be upgradable.

The Aspire Vero includes processors up to a 12th-gen Core i7, and with the AV15-52 15-inch model, Acer is offering up to 24GB of LPDDR4 memory, more than the traditional 16GB. Only integrated Iris Xe GPUs will be offered, and up to 1TB PCIe SSDs. With the move to a 12th-gen Core, the Vero lineup is moving to Thunderbolt 4, too.

Acer is also offering a wireless Vero mouse and keyboard, which will be available in November for $79.99, as well as the Veriton Vero all-in-one, a 24-inch standalone PC that Acer will sell for $799 and up beginning in October.

How to use a Nintendo Switch Pro Controller on PC

How to connect a Nintendo Switch to your TV