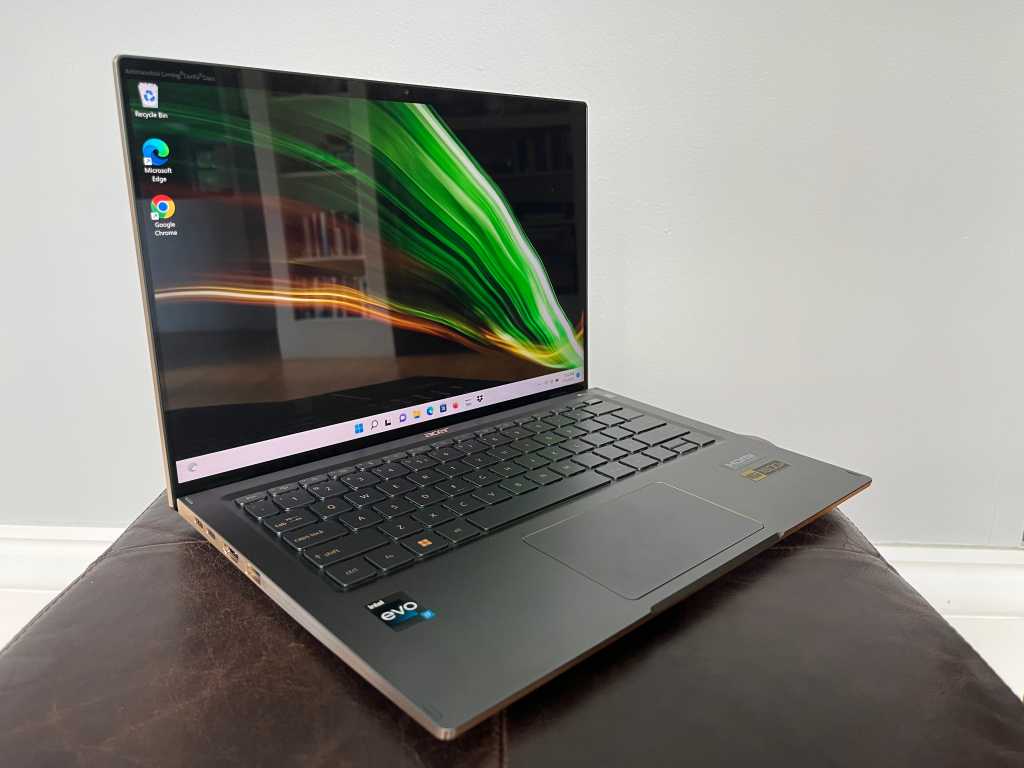 If not for its terrible touchpad, the Acer Swift 5 would be a winner for its clean design, modern components, and bright and spacious 14-inch 16:10 display.

Can a lamentable touchpad ruin what is an otherwise well-rounded laptop? That’s the big question with the Acer Swift 5, a 14-inch ultraportable with a sleek design and a roomy, hi-res display powered modern components. Unfortunately, the touchpad is undersized with a terrible click mechanism that sours the deal.

That said, touchpad aside, the Swift 5 has a lot going for it. It packs in a 14-inch display with a tall 16:10 aspect ratio inside a sleek, all-metal enclosure and weighs less than three pounds. Inside, the system boasts a 12th-gen Intel Core i7 CPU, 16GB of RAM, and a spacious 1TB SSD. The laptop delivers the strong performance and long battery life that business execs need along with the high style and portability they crave. That touchpad, though.

Along with the move to 12th-gen Intel Core processors, this updated Swift 5 model also expands the 14-inch display. It’s still a 14-inch panel as previous models, but it trades the widescreen 16:9 aspect ratio for a 16:10 screen. This may not sound like a big deal, but it makes the 14-inch display feel roomier because you have more room from top to bottom. The taller display means you can read more lines of a web page or document or view more rows in an Excel sheet without scrolling.

Along with the new aspect ratio comes a jump in resolution. Previous versions supplied a standard full HD resolution, but this new Swift 5 boasts a 2560×1600 resolution that results in an incredibly sharp picture. It’s also very bright. Acer rates the panel at 425 nits, and my testing showed even brighter than that at just over 500 nits. Although the Swift 5 is not a 2-in-1 convertible, the display does feature touch support, which you may appreciate after using the touchpad.

Okay, let’s talk about the touchpad. For starters, it feels a bit cramped. Given the compact design of the laptop, Acer couldn’t make it too much larger, but there is still some room above the touchpad and a bit below it to expand its dimensions. The much bigger flaw, however, is its click mechanism. It’s awful. The touchpad surface feels loose. But not so loose that there is something wrong with our review unit that is unlikely to show up on others. No, the surface is loose when clicked so that you must press through a false click to get to the actual click. It’s just a terrible experience. The deep travel with the false click before arriving at the actual click makes a simple click feel like a chore. You’ll find using the touch display or an external mouse to be better input options than the kludgy touchpad.

There are no such issues with the keyboard. Its keys feel firm and snappy, and there are no shortened keys. The up- and down-arrow keys are half-height, but that’s not unusual. The rest of the keys are full size and located where you expect them to be. I was immediately comfortable typing on the Swift 5, but the gold lettering doesn’t provide the best contrast against the dark gray keys. The two-level backlight helps somewhat in darkened conditions, but the glare of the display against the keys can wash out the lettering and make it difficult to see which key is which.

Acer sells two color versions of the Swift 5; the laptop comes in what the company calls Mist Green or Steam Blue. We received the green color, but it looks more like dark gray than anything else. Only in certain light do you see a hint of green. The edges, Acer logos, and aforementioned key symbols are gold. While I wish the key symbols were white for better contrast, I like the gold accents elsewhere. The color contrast looks cool as does the contrast in finishes. The green/gray surfaces feature a matte finish while the gold accents are more reflective. It adds up to a sharp-looking laptop and one that stands out from the gray-and-chrome pack without looking garish.

The aluminum chassis feels sturdy. There is no flex in the lid or the keyboard deck and only a small amount of flex on the bottom panel. The Swift 5 feels rugged enough to stand up to the rigors of daily business travel.

The Swift 5 weighs 2.8 pounds, which makes it highly portable but far from the lightest 14-inch ultraportable. The Lenovo IdeaPad Slim 7 also has a 14-inch 16:10 screen and weighs nearly half a pound less at 2.4 pounds. And the previous Swift 5 with the older 14-inch 16:9 display weighs only 2.3 pounds.

Zoom calls and video conferences have become a larger part of work life, and laptop webcams are improving as a result. You can count the Swift 5 among the laptops following this trend, trading in the previous standard 720p camera for a 1080p camera. The Swift 5’s webcam will make you look sharp to your video conference attendees. The image it produces is free of noise while exhibiting accurate colors and skin tones. One downside to the webcam? It lacks a privacy shutter.

Unfortunately, the Swift 5 makes no gains with audio output. It features a standard set of stereo speakers that produce typically tinny laptop sound. The speakers might have sounded a bit fully if they fired upward, but on the Swift 5 they fire downward, which doesn’t help their sound.

With both USB Type-C and -A ports and an HDMI port, the Swift 5 will not require you to travel with an adapter. It features a pair of USB-C ports and a pair of USB 3.2 Gen 1 Type-A ports. The Type-A ports are split with one on each side, letting you plug your mouse into your preferred side. The USB-C ports are both located on the left side, which isn’t always the best side if the nearest power outlet to you is to your right. On the plus side, both USB-C ports offer Thunderbolt 4 support for speedy 40Gbps data transfers and DisplayPort connectivity.

To get a sense of the XPS 15 9520’s performance, we compared its benchmark results to those of other ultraportables including the Samsung Galaxy Book2 Pro 360, which features the same Core i7-1260P chip as the Swift 5. Two laptops, the Acer Swift 3X and Lenovo ThinkPad X1 Carbon Gen 9, feature 11th-gen Core i7 chips, while the remaining pair in the Dell Inspiron 14 7000 and Lenovo IdeaPad Slim 7 Carbon feature AMD Ryzen 7 5000-series CPUs. All rely on integrated graphics.

Our first benchmark is PCMark 10, which measures performance on everyday computing work including office productivity tasks, web browsing, and video chats. AMD-based laptops have had the edge on PCMark for the past year or so, but Intel’s new generation of Core processors have closed the gap. The AMD-based Lenovo IdeaPad Slim 7 Carbon is tops among this group, but the Samsung Galaxy Book2 Pro 360 and the Acer Swift 5 are nipping at its heels while also edging the AMD-based Dell Inspiron 14 7000. The pair of 11th-gen Core i7-based laptops finished at the back of the pack.

Our HandBrake benchmark tests how a laptop is able to handle crushing CPU loads over a lengthy period—in this case, transcoding a 30GB MKV file to a format suitable for Android tablets using HandBrake, the free video encoding utility. The Swift 5 took top honors on our HandBrake test, with the AMD-based systems trailing behind and the two 11th-gen Intel laptops bringing up the rear.

Next up is Cinebench, another CPU-intensive test but one that renders a complex 2D scene over a short period of time. The Swift 5 proved it’s as good a sprinter as marathoner, finishing first on both the multi-threaded and single threaded tests.

None of the laptops here will be confused with a gaming laptop, but it’s notable that the Swift 5 and the Samsung Galaxy Book2 Pro 360 top the charts. It shows the strides Intel has made with its integrated GPU with its 12th generation of Core processors, further widening the gap between Intel Iris Xe graphics and AMD’s integrated Radeon graphics.

To test a laptop’s battery life, we loop a 4K video using Windows 11’s Movies & TV app, with the laptop set to Airplane mode and earbuds plugged in. We set the screen brightness at a relatively bright 250 nits to 260 nits, which is a good brightness for watching a movie in an office with the lights on. The Swift 5 ran for 13 hours on the test, which is impressive in its own right and even more so when you factor in its high resolution display that consumes more battery resources than a Full HD display would.

Between its sleek and sturdy all-metal design, roomy 14-inch display and sub-three-pound weight, strong 12th-gen Core i7-led performance and long battery life, the Acer Swift 5 is an ultraportable not without its charms. This is one laptop, however, that you ought to get your hands on before purchasing. The touchpad is undersized and has one of the worst click mechanisms this reviewer has ever encountered. Perhaps the false-click-before-you-get-to-the-real-click response won’t bother you as much as it did me, but the terrible touchpad prevents me from making a strong recommendation. Instead, I would counsel you to check it out before you buy it. Because if you like the touchpad (or just don’t hate it), then the chances are good that you’ll love the Swift 5.