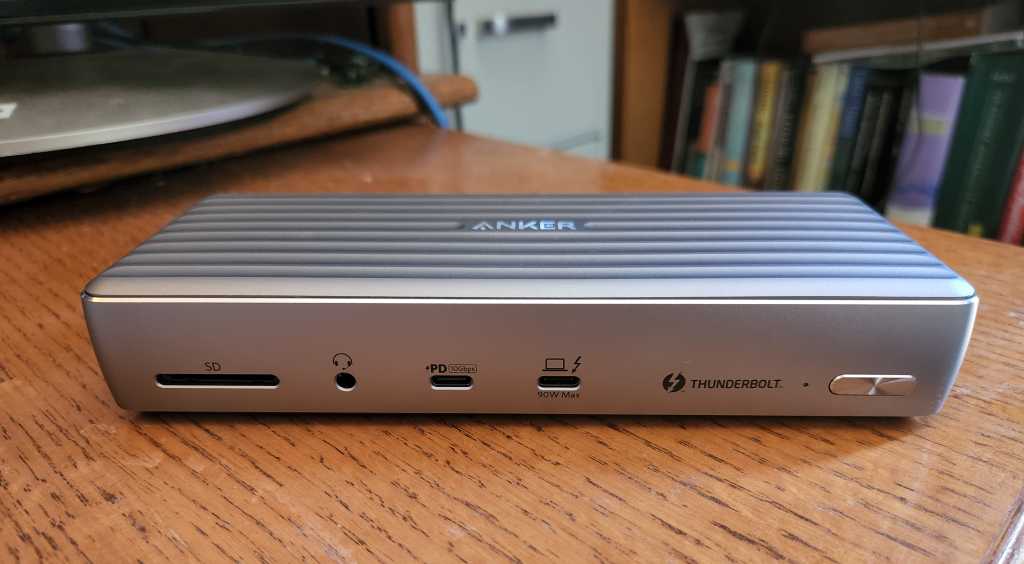 The Anker Apex 12-in-1 Thunderbolt 4 Dock (777) disappointed us in terms of its performance, though the specs look great out of the box.

The Anker Apex 12-in-1 Thunderbolt Dock seems like a great Thunderbolt dock out of the box, but in testing it fell considerably short of what we expected in terms of performance and connectivity.

To be fair, we’ve included the Anker Apex (also known by its model name, Anker 777) in our list of the best Thunderbolt docks, based in part on the review of the Anker 777 by our sister site, TechAdvisor. We’ve since acquired a review unit for ourselves, and just aren’t in love with its shortcomings.

Anker’s Apex dock measures 7.34 x 2.89 x 1.31 inches, and 0.99 pounds—light enough to put in a bag if it wasn’t for the hefty charging brick that accompanies it. It’s really designed to lay horizontally on your desk, although Anker sells a vertical stand for $30. As it is, the $350 or so MSRP is quite high.

Otherwise, the dock includes a pair of undisclosed HDMI ports capable of 4K60 video, according to the specifications. There aren’t any DisplayPort options available, though those can be added via a USB-C dongle connected to the Thunderbolt port. On the rear of the device, Anker includes four USB-A ports: two helpfully marked with a “keyboard” icon to designate that they’re only capable of 480Mbits/s, and two 10Gbps ports that are labeled as well. All put out 4.5W for charging. Smartphones should really be charged from the front-mounted USB-C port, however, which generates a hefty 20W of power, which began fast-charging our test phone.

The Anker Apex 12-in-1 Thunderbolt dock also includes gigabit ethernet, a UHS-II SD card reader, and a 3.5mm headphone jack. The dock is powered, of course, with a 120W power supply. There’s also a convenient power button at the front that can be used to turn off the dock when not in use.

In testing, though, we quickly ran into some problems. When connected to two different 4K displays using one test laptop (a Samsung Galaxy Book2 Pro 360 with two Thunderbolt ports) the dock simply wouldn’t drive a second display at 60Hz, surviving shutdowns, reboots, and disconnecting the dock. But it worked properly when connected to a second Thunderbolt 4 laptop, the Microsoft Surface Laptop Studio. Well, for a while, anyway.

Though the laptop played back protected content on Netflix, as expected, the performance on a 4K60 YouTube stream was abysmal: dropped frames all over the place, to the point that YouTube started dropping down to 800p-formatted content. For some reason, the dock struggled with the ethernet cable inserted. Writing to an SDXC (UHS-II) card came in at 200MB/s, rather than the 277MB/s rated write speed. And when we tried to connect the Surface Laptop Studio again to check the review, we ended up with the 60Hz/30Hz split between the two displays again, although streaming performance improved.

We can accept some glitchiness with a Thunderbolt dock—with a mix of cables, ports, laptops, operating systems, drivers, and peripherals, there’s bound to be some quirks. But what we saw didn’t impress us, especially with the high price. We’d encourage you to start your Thunderbolt shopping elsewhere.