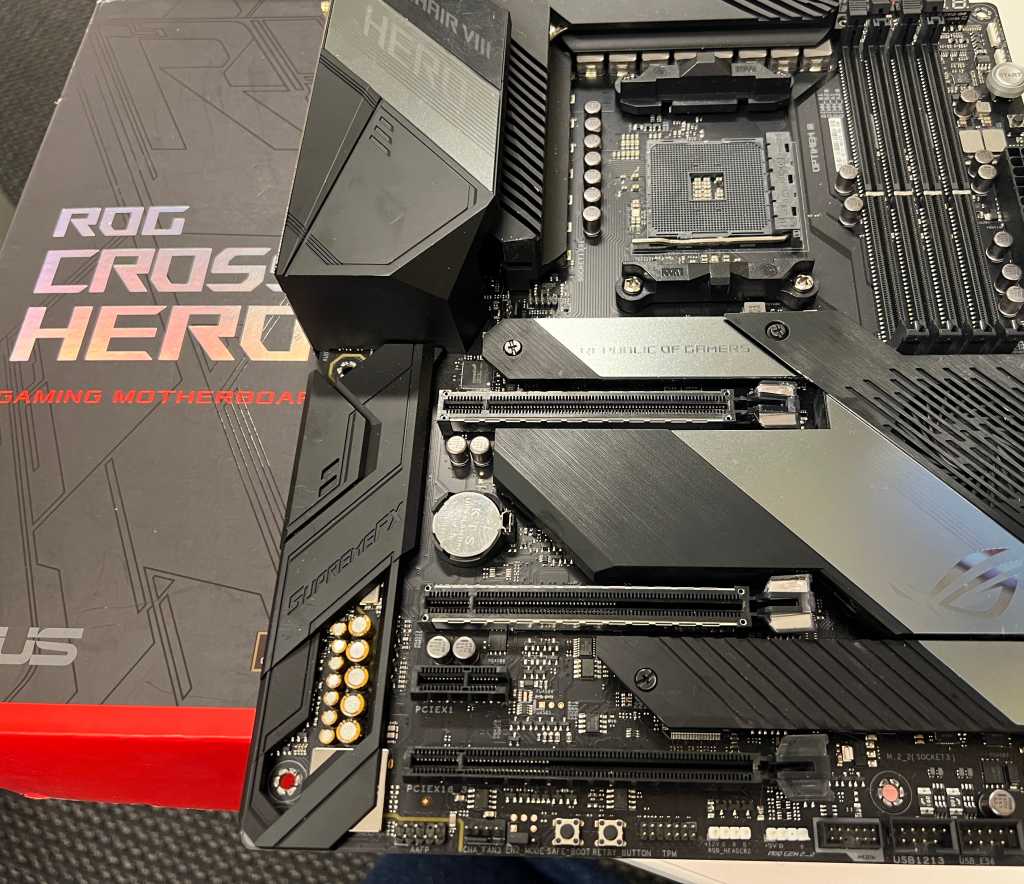 Over several iterations, the Asus Hero lineup of motherboards has garnered a strong following among PC builders. It’s chock-full of features with an attractive and premium design. Being the entry way into the “ROG” (Republic of Gamers) tier, it also is priced better for your gaming buck than the more “extreme” options.

Does the X570 Hero still pack a punch today if you’re considering a premium motherboard? How about the newer “Dark Hero” variant? We’ll discuss the specs, features, design, and value.

The Asus X570 ROG Crosshair VIII Hero aims to be the perfect “Goldilocks”-level choice with its price and available feature set. Coming in at $399, it packs enough premium specs to make you wonder if it’s even necessary to spend more. PCI-E Gen 4? Got it. Connectivity for most USB and networking needs? Got it here, too.

You’ll get support for both Ryzen 3000 and Ryzen 5000, with DDR4 RAM. DDR5 is only available on the Intel Z690 motherboards, and not necessary right now due to minor performance increases for the price. (Check out our review of the Z690 ROG Asus Maximus Extreme.)

If you buy an older-stock X570 Hero, do keep in mind it may need a BIOS update before working with Ryzen 5000. (The early ones did, but otherwise will work with Ryzen 3000 right out of the box.)

If you need Wi-Fi, make sure to hunt down the Wi-Fi specific version, or else you’ll only have access to the 2.5G and Gigabit LAN. No 10G LAN here—you’ll need to step up to a higher-end option for that.

Most of the other specs cover all that you’ll really need in a high-end build: plenty of fan headers, Asus-optimized software, and RGB headers to light up the world. USB connectivity is here aplenty, even with USB type C. If you need Thunderbolt, you’ll need either a more expensive motherboard on the AMD side (only a few have it) or to swing over to the Intel side, where it’s more common.

As for the X570 “Dark Hero” version of this motherboard, it only adds a few changes in the specs: more robust power stages and dynamic overclocking, plus removing the chipset fan for less noise.

Here are some important specs to be aware of for the X570 Hero:

Sporting a beautiful, modern design, the X570 Hero is the perfect blend of aesthetics and RGB goodness. If you want a more understated look, the Dark Hero version is even more subdued.

The Hero lineup is where you’ll find design DNA shared with Asus’s premium ROG line of motherboards. This is probably most evident in the covers and plating for the M.2 slots that lie underneath, with very attractive cues and tasteful RGB.

You’ll notice the regular Hero does have a chipset fan, which can be manually controlled. (It can get loud if it’s set to max, however.) The Dark Hero removes this chipset fan completely, with passive cooling.

You’re paying a premium over more basic motherboard options, such as Asus’s Strix lineup with similar capabilities. Here are some areas that may justify the price premium versus cheaper options:

The X570 Hero can handle anything thrown at it, even the mighty Ryzen 9 5950x. With an easy-to-use and capable BIOS, you’ll have some tweaking options, too. Since, in general, you’ll have diminishing returns with manually overclocking modern CPUs like Ryzen 5000, you’ll at least squeeze out a tiny bit better performance. Better yet, similar performance but lower voltages or thermals are even more appealing.

If you’re performance minded, you’ll want to get the Dark Hero version. It has upgraded power delivery with 90A instead of 60A, which will make your late-night mad-scientist escapades even better. It also removes the chipset fan, which helps with noise while keeping thermals in check. Additionally, you’ll get a dynamic overclocking option on the Dark Hero, giving you more options that go beyond the standard Hero.

With motherboard prices increasing, the X570 Hero and Dark Hero still represent good values in the current market. Z690 has already brought much higher pricing with the newer feature sets of the newest generations, and you can expect similar to happen with the next AMD Ryzen update.

With AMD recently announcing the 3D Cache version of the 5800X CPU, there’s still plenty of new CPU horsepower to take advantage of with these motherboards, especially the Dark Hero.

With Ryzen 5000 CPU prices at some of the lowest points ever, it may not be a bad idea to step into the X570 Hero as a great premium value option.

Editor’s note: This review originally published on April 13, 2022, but was updated to include our review video.

Poco F4 GT review: One for the mobile gamers