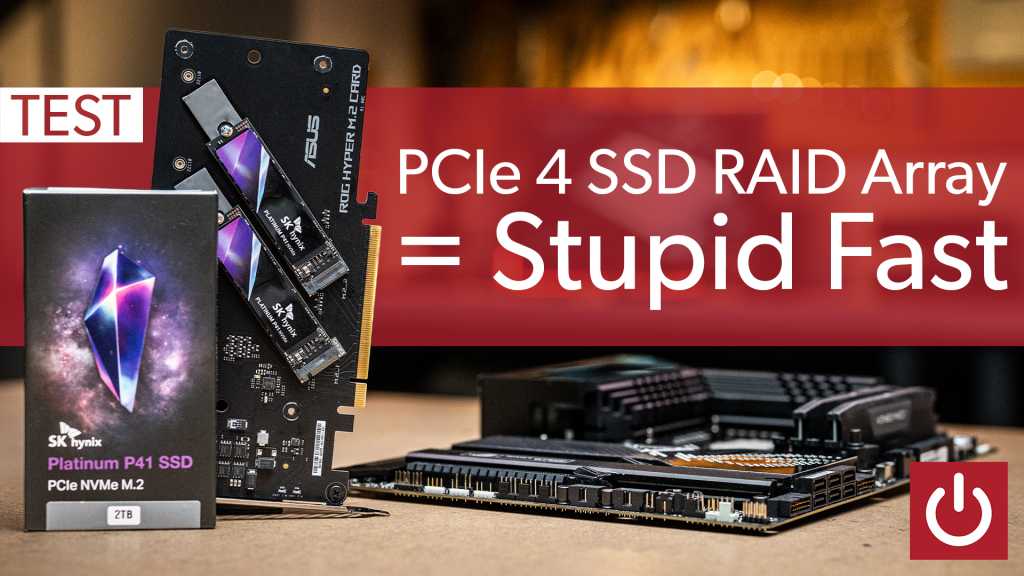 RAID, Redundant Array of Inexpensive Disks, is a lot less relevant than it used to be. With super-fast SSDs and easy-to-use backup systems both easily available, the primary needs to chain multiple drives together really aren’t there anymore. Unless you’re Gordon Ung, and you happen to have a bunch of the fastest PCIe 4.0 SSDs on the market sitting around a PC building lab. To watch Gordon’s descent into madness experiments with incredibly fast RAID arrays, check out the latest video on the PCWorld YouTube channel.

You can almost hear the cackle in Gordon’s voice as he installs the Platinum P41 M.2 4th-gen PCIe SSDs sent to us by SK Hynix. The setup is enabled by the Asus ROG Maximus Z690 Hero motherboard with triple M.2 slots, plus an add-on “Hyper M.2 PCIe” add-on card with two extra M.2 slots and RAID capability. The expansion card is required, because the onboard M.2 slots didn’t properly distribute the PCIe lanes. Gordon says he experimented with various configurations of the onboard slots and add-on card more than two dozen times.

There are other hurdles, too. It’s always tricky to tell which M.2 slot is the “primary” on any given motherboard, and Gordon found that trying to string together four or more drives actually resulted in slower speeds, hitting a sweet spot of three. Getting the RAID 0 array setup in the BIOS is a bit of a pain, too. But after a bunch of experimentation and tweaking, he ended up with a 5.7 terabyte array that’s the envy of anyone with a bloated Steam library.

But the $64,000 question is “how fast is it?” A standard, properly installed SK hynix P41 PCIe 4.0 drive can hit 7 gigabits per second read and 6.5Gb/s write speeds on its own. In the triple RAID 0 array, Gordon hit approximately triple those numbers: 21.3 Gb/s read and 18.7Gb/s write speeds. It is frankly insane in terms of read and write performance, and there’s hardly anything you can run on Windows that would actually be able to use that kind of Ludicrous Speed.

But that’s not the point. Gordon did it because he can. And for that, we salute him. And if you want to see more ridiculous PC building excess, be sure to subscribe to the PCWorld YouTube channel.

Chromecast with Google TV finally lands in India, but is it worth buying?