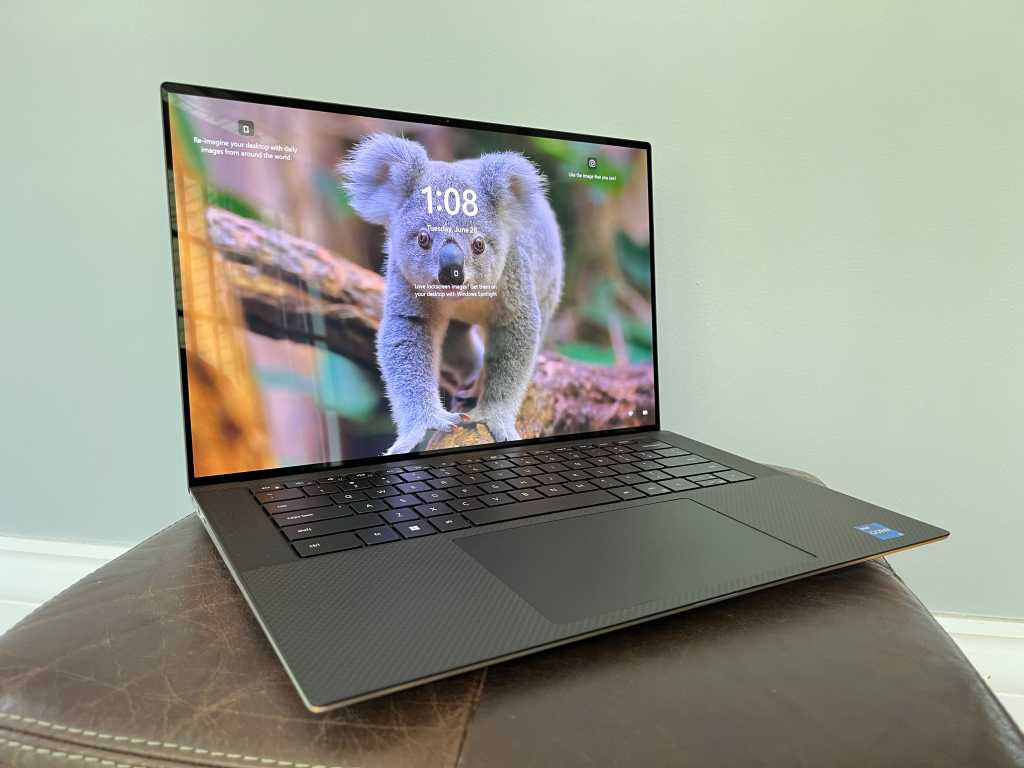 Dell’s latest XPS 15 boasts a 15.6-inch OLED display for content creators or anyone else who appreciates unparalleled contrast ratio.

The Dell XPS 15 9520 is a premium laptop that boasts a vibrant OLED display surrounded by a gorgeous design. It’s definitely geared towards content creators. Inside, it features a 12th-gen Intel Core i7 processor and GeForce RTX 3050 Ti graphics, a duo that delivers strong application and multimedia performance and a smidgen of 3D graphics oomph. The all-metal design is rugged and the carbon fiber keyboard deck is both rock solid and eye-catching. Creative professionals will appreciate the high style and graphics muscle, and execs looking for a high-end productivity laptop can skip the RTX option to cut back on the price and still get a workhorse machine that’s sleek and durable with an absolutely stunning display.

Our Dell XPS 15 9520 test system is selling for $2,299 direct from Dell and features the following specs:

The Dell XPS 15 9520 line starts at $1,449 for a configuration that features a 12th-gen Core i5 CPU, 8GB of RAM, Intel UHD graphics, a 512GB SSD, and a non-OLED, non-touch full HD display. Our test system includes upgrades to the CPU, RAM, GPU, and display that increase the price to $2,299. Beyond our test model, you can opt for a 12th-gen Core i9 chip and up to 64GB of RAM and a 2TB SSD. For the same cost, you can trade out the 3.5K OLED display for a non-OLED 4K panel. Unless you have a particular need for a 4K resolution, I would strongly urge you to choose the OLED option we tested; it’s spectacular.

OLED display and a premium finish

The Dell XPS 15 9520 is a premium laptop that definitely looks the part. The all-metal enclosure feels sturdy and is an attractive mix of brushed aluminum and carbon fiber surfaces. The top and bottom panels are a silver brushed aluminum, and the keyboard deck adds a striking contrast with its black carbon fiber texture.

Thin bezels frame the display to create a fairly trim 15.6-inch package. The laptop weighs 4.23 pounds, which is slightly less than 16-inch 16:10 models we’ve seen recently such as the 4.3-pound Asus VivoBook Pro 16X OLED, the 4.35-pound MSI Summit E-16 Flip, and the 4.45-pound HP Spectre x360 16. It may be a bit heavy for daily commuting, but who among us is heading to the office every day? For a hybrid work model where you are working from home some days and in the office others, the XPS 15 9520 won’t be a burden.

It’s a bit of a burden, however, to open the lid. Between the small lip on the edge of the lid and the firm hinge, it’s harder than it should be to lift the lid with one finger. I found it to be more of a two-handed affair. I wish Dell had included a recessed section on the front edge of the lid to give me a better grip to raise the lid.

The display is the star of the show and boasts two of our favorite screen elements: an OLED panel and a 16:10 aspect ratio. With an OLED display, you get a superior contrast ratio with the deepest blacks. The XPS 15 9520’s display is stellar. It features what Dell calls a 3.5K resolution. That is, 3456×2160 pixels. That’s a bit less than a 4K resolution but looks plenty crisp across a 15.6-inch display.

Colors appear vivid and accurate, and details can be seen in the brightest and darkest parts of an image. And the 16:10 screen ratio provides more vertical room than a widescreen 16:9 display so you can fit more on the screen and scroll less through long documents and web pages. I would probably agree to lug around an extra ounce or so if Dell opted for a 16-inch panel instead of a 15.6-inch unit, but the display still feels spacious enough for creative work and general Windows multitasking.

Dell offers two non-OLED display options with an FHD+ or UHD+ resolution. Both are rated for an impressive 500 nits of brightness to our OLED review unit’s 400-nit rating, but our test unit is plenty bright. It actually measured a bit higher than its rating. I wouldn’t trade the OLED’s superior contrast ratio for a slightly brighter panel.

The “A” side of the AV output may not be as stunning as the “V” half, but the laptop’s audio is certainly above average. Dell packs four speakers inside the XPS 15 9520. There’s a pair of 2.5-watt woofers and a pair of 1.5-watt tweeters for a total of eight watts of output. This quartet has more punch than the stereo speakers of a typical laptop. The sound is more dynamic with some separation evident between the high and mid-tones, and there is something resembling a bass response, which is seldom present on a laptop.

A 1080p webcam is becoming a more common presence on a laptop as Zoom and other video conferences are more commonplace, but, sadly, Dell outfits the XPS 15 9520 with a 720p camera. Its grainy image is plagued by noise and overexposure in the brightest parts of the image.

The Dell XPS 15 9520 features a full-size keyboard sans numberpad. Without needing to squeeze in a numpad, the keyboard is afforded the space to have luxuriously wide keys on each side for Shift, Enter, Backspace and Tab. The up- and down-arrow keys are half height, but those are the only keys that are full-size. I was immediately comfortable typing on the keyboard. The keys are quiet and responsive and feature two-level backlighting. The keyboard deck is rigid with no flex, even under the fingertips of this thunderous typist.

The keys themselves feel soft with shallow travel. I would have preferred a snappier response when typing but enjoyed the firm keyboard deck that had no hint of flex. I also liked the three-level keyboard backlighting; it let me keep the lighting at the right level in a variety of darkened environments.

The gigantic touchpad is a pleasure to use. The matte finish allows for smooth gliding, and the click response is quiet with just the right amount of travel. Between the huge touchpad and touch display, you have two excellent options for navigating Windows.

You also have two easy options for logging into Windows. Although I wish the webcam had a higher resolution, it is an IR cam that lets you use facial recognition for secure logins without needing to enter your password. The power button also doubles as a fingerprint reader, giving you a second secure login option.

Connectivity is sparse. On the left side are two USB-C ports with Thunderbolt 4 support. On the right is a USB-C 3.2 Gen 2 port with DisplayPort and power delivery support, an SD card slot and a combo audio jack. That’s it, unless you count the adapter that Dell includes in the box. It turns one of the USB-C ports into a USB Type A port and an HDMI port. Part of the cost of getting such a thin design — the laptop is only 0.73 inches thick — is the jettisoning of USB-A and HDMI ports. The inclusion of the adapter is appreciated, but it can get lost or misplaced and can’t replicate having a more diverse mix of ports on the machine itself.

To get a sense of the XPS 15 9520’s performance, we compared its benchmark results to those of other content-creation laptops such as the Asus VivoBook Pro 16X OLED, Acer Swift X, HP Spectre x360 16, Microsoft Surface Laptop Studio, MSI Summit E-16 Flip, and Dell’s own XPS 17 9710.  We also included a pair of MSI Katana gaming laptops that feature low-end RTX graphics and the same Core i7-12700H CPU as the XPS 15 9520.

Our first benchmark is PCMark 10, which measures performance on everyday computing work including office productivity tasks, web browsing, and video chats. The two MSI Katana laptops top the chart, but the XPS 15 9520 is among those that finished with a score above 6,000, indicating it has more than enough oomph to run basic productivity applications.

Our HandBrake benchmark tests how a laptop is able to handle crushing CPU loads over a lengthy period—in this case, transcoding a 30GB MKV file to a format suitable for Android tablets using a free video encoding utility. The XPS 15 9520 finished toward the end of the pack, likely because it is one of the more compact models in the group. Over the long haul, it’s going to give up ground to larger laptops with fewer thermal restrictions.

Next up is Cinebench, another CPU-intensive test but one that renders a complex 2D scene over a short period of time. During this shorter test, the XPS 15 9520 excelled, finishing second only to the MSI Katana GF66.

It’s not a gaming laptop, but since it has RTX graphics, we decided to see how it did with 3D graphics and two of our gaming benchmarks. On 3DMark’s Time Spy benchmark, it finished toward the end of the pack and was one of only three systems here that failed to top the 4,000 mark. Still, it was in the neighborhood of 4,000 and didn’t embarrass itself.

A better test of 3D gaming than a synthetic 3D benchmark is a 3D game, so we ran two of our 3D gaming benchmarks, Rise of the Tomb Raider and Metro Exodus. It averaged a playable 60 fps on the older Rise of the Tomb Raider game at 1080p at the game’s Very High presets. On the more demanding Metro Exodus, it managed only 16 fps, but no laptop we’ve tested with RTX 3050 or 3050 Ti graphics is able to come close to 60 fps on Metro Exodus with these settings. The RTX 3060-based Dell XPS 17 was unable to even get halfway to 60 fps on the test.

To test a laptop’s battery life, we loop a 4K video using Windows 11’s Movies & TV app, with the laptop set to Airplane mode and earbuds plugged in. We set the screen brightness at a relatively bright 250 nits to 260 nits, which is a good brightness for watching a movie in an office with the lights on. The Summit E-16 Flip ran out of juice a minute shy of six hours, which is far less than average. Powering a high-resolution display comes with a sacrifice in battery life and that’s what you get here with the XPS 15 9520.

The Dell XPS 15 9520 delivers the goods for content creators with its rugged and beautiful enclosure, stunning OLED display, and competitive performance with the latest Intel silicon and GeForce RTX graphics. It may be a tad too heavy for regular commuting, but office workers looking for a productivity machine with a high design and roomy display will also find lots to like about the XPS 15 9520. Given that it’s probably not making daily commutes, however, I wish Dell bumped the display up to a 16-inch 16:10 panel.

The RTX 3050 Ti graphics aid its multimedia capabilities but are of limited use for 3D gaming. If you are devising a way to package a work laptop and gaming laptop into one, you’ll need to look elsewhere. You’ll likely be able to find another laptop with a higher-end RTX GPU for less than the cost of our RTX 3050 Ti-based test model, but you’ll need to sacrifice the OLED panel and settle for a lower screen resolution than the 3.5K resolution that our XPS 15 9520 provides.

How to update your router’s firmware

10 innovative Opera features that lured me away from Chrome