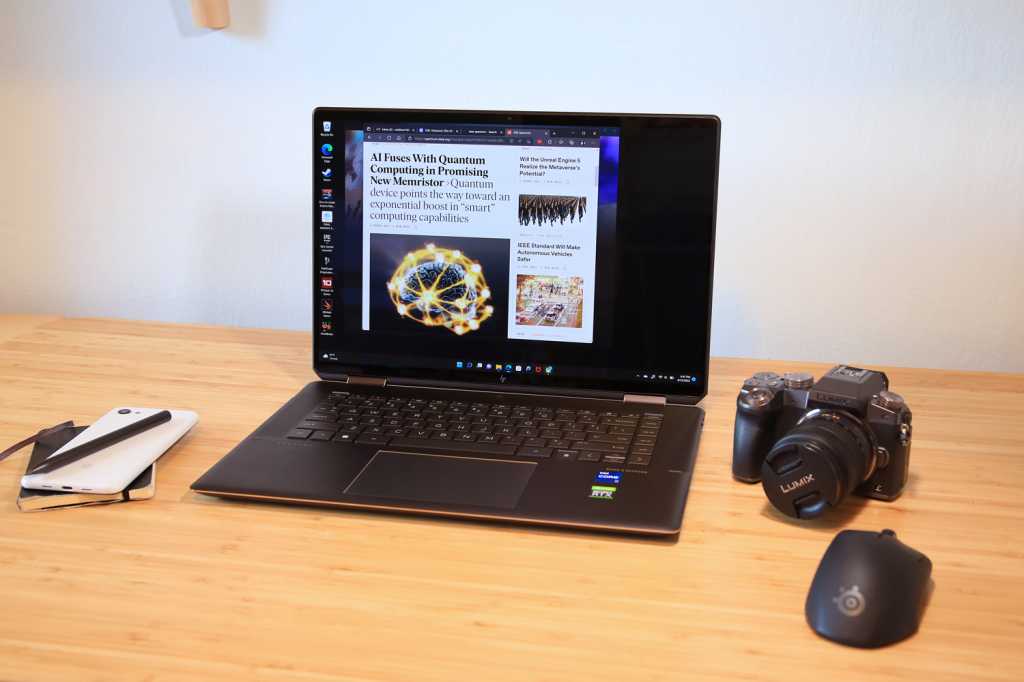 The HP Spectre x360 16 packs an amazing optional OLED display and a long list of features, but its perks are undercut by disappointing processor performance.

2022 is a key year for Intel’s processor line-up. The company’s new 12th-generation Core processors, which have significantly more cores than prior models, are set to deliver big gains in multi-core processor performance. However, HP’s Spectre x360 16 is on the wrong side of this trend. It’s a solid 2-in-1 with an excellent screen and a long list of features, but its outdated 11th-gen Core processor holds it back. It’s important to note that it’s not a bad machine. With its 1080p webcam and connectivity options, it’s going to be a good pick for the right person. However, it just falls behind the power of a 12-gen processor.

The HP Spectre x360 16 is more unique than it seems. Many 16-inch Windows laptops pack an Intel Core i7 processor with Nvidia discrete graphics. Here’s the trick. This is a 2-in-1, not a laptop. I suspect many shoppers considering this machine will cross-shop it with laptops like the Dell XPS 15, but if you want a 2-in-1, you have less choice.

There’s a few key details worth mentioning. This laptop supports not only Wi-Fi 6, which is common, but also Bluetooth 5.2, which is harder to find. It also has two Thunderbolt 4 / USB-C 4 ports with Power Delivery and DisplayPort. There’s also a 1080p webcam, a fingerprint reader, and an IR camera. The optional OLED touchscreen’s resolution goes beyond 4K. HP even bundles an active pen.

HP, like Dell, has carved out its own unique design. It’s a collection of hard lines, sharp angles, and bronze-gold colors that add up to a glamorous look. Personally, I prefer the more approachable feel of Dell’s faux-carbon fiber interiors, but I can’t deny the HP Spectre x360 16 is a looker.

Build quality falls in line with the design. The laptop’s metal chassis is as sturdy and stable as others in its class. Flex can be found in the display should you go looking for it, but the bottom half is extremely rigid.

This is a large and heavy 2-in-1. The Spectre x360 16, like other machines in its class, is too heavy and large to use as a tablet for any length of time. Tent mode, which folds back the keyboard for use as a stand, is where it’s at. The large touchscreen and included active pen make it a great choice for sketching out an idea or drawing in digital art software.

A spacious, easy to understand layout makes the HP Spectre x360 16’s keyboard approachable. However, the more I used it the less I liked it.

The problem? Key feel. Travel is moderate and the bottoming action struck me as soft. Don’t get me wrong, it’s not a bad keyboard. I used it for hours without a tangible, functional problem. Compared to a Dell XPS 15 or MacBook Pro 16, however, I was unimpressed.

The touchpad is good. It’s large, responsive, and works well with Windows 11 multi-touch gestures yet nothing about it stands out. It’s not especially large or remarkably comfortable. It’s not a major issue, but at this price point shoppers can expect better elsewhere.

As mentioned, the Spectre x360 16 comes bundled with an active pen. This is a great perk. Most tablets and 2-in-1 devices, including Microsoft’s Surface devices and Apple’s iPad Pro, charge extra for this feature. The pen is not as comfortable as a Surface Pen or Apple Pencil, but did the job well enough for my use, which was centered on jotting down notes in OneNote.

All of this translates to a fantastic experience in most situations. The display looks deep, rich, and vivid, especially when fed high-resolution 4K video. It’s a great display for both photography and video editing because it has the resolution and color performance to handle large video and image files.

The touchscreen’s superb 3,840 x 2,400 resolution is due to its 16:10 aspect ratio. As a result, the screen is only an inch more narrow and actually a hair taller than a typical 17-inch laptop display with a 16:9 aspect ratio. In short, the Spectre x360 16 provides a lot of display real estate.

The display has a weakness it shares with other OLED laptops, which is brightness. The display reaches 352 nits in SDR (up to 428 nits in HDR). That’s hardly dim, but not as bright as the best IPS laptop displays. Glare remains a problem.

Four speakers with Bang & Olufsen branding line the Spectre x360 16’s keyboard. Their placement improves audio clarity, which is good news if you’re into podcasts or YouTube. The speakers sound just okay in music, movies, and games at low to mid volume, but a lack of bass is an issue if you want to blast tunes. Still, they’re fine for casual use.

HP ships the Spectre x360 16 with a 1080p webcam. This is a big upgrade from a 720p webcam with greater detail and more accurate color. The improvement is most noticeable in fair to decent lighting that lets the webcam pull out detail in hair and skin. Low light is an issue, but that’s true for any webcam.

A dual microphone array provides audio and performs like any in this category. It sounds clear and can pick up a voice from across the room, but audio can sound tinny or distant compared to a dedicated microphone. Still, it’s good enough for video conferencing.

Biometric login is available through a fingerprint reader or an IR camera supporting facial recognition. Both work but, as with other Windows laptops, I found the IR camera quicker and more reliable.

The HP Spectre x360 16 has two Thunderbolt 4 / USB 4 Type-C ports, each of which support 40Gbps data, USB Power Delivery, and DisplayPort Alternate Mode. It also has a USB-A port, one HDMI 2 output, a combo headphone microphone jack, and a MicroSD card reader.

On the plus side, the Thunderbolt 4 / USB-C 4 ports provide great compatibility with modern peripherals and devices. However, this leaves the laptop with just three USB ports, which isn’t amazing. This is equivalent to a Dell XPS 15 and a bit behind a MacBook Pro 14 or 16.

The Spectre x360 16’s connectivity includes some quirks. Two ports – one Thunderbolt 4 / USB-C 4 port and the 3.5mm audio jack – are located on the rear corners, so they face at an angle rather than perpendicular with the flanks of the laptop. While unusual, this location can help with cable routing. An annoying flap covers the USB-A port, however, which makes connecting USB-A peripherals more difficult than it should be.

HP provides Wi-Fi 6, which is common, and also Bluetooth 5.2, which is less so. This latest version of Bluetooth is not a must-have but it’s nice to see included. Wi-Fi performance was reliable throughout my testing in my home, which includes use in a detached office.

HP will sell you a Spectre x360 16 with any processor you’d like – so long as it’s an Intel Core i7-11390H. This 11th-gen quad-core processor is the only option available on HP.com. My review sample paired it with 16GB of RAM, 1TB of PCIe NVMe storage, and Nvidia RTX 3050 graphics.

Testing begins with PCMark 10, a test meant to represent typical day-to-day productivity. The Spectre x360 16’s delivered a disappointing score of 5,098. Though hardly slow, the HP doesn’t provide much advantage over the less expensive Acer Swift 3 16-inch and falls behind Lenovo’s new Yoga 9i, a smaller and sleeker 2-in-1 with Intel’s 12th-gen Core.

If PCMark 10 was disappointing, Cinebench R15 is a minor disaster. The Spectre x360 16 reached a score of just 993. That’s roughly half the new Lenovo Yoga 9i with Intel 12th-gen Core and also well behind 2-in-1s with AMD’s Ryzen 7 series processors. The quad-core i7-11390H lacks the core count to keep up in this demanding mutli-threaded workload.

Handbrake delivers more bad news. Encoding a 4K .mov file of the short film Tears of Steel to H.265 MKV using the processor alone required just over one and a half hours. That’s not an unusual result for a quad-core laptop but, once again, it falls behind competitors with six, eight, or more cores.

Finally, we have a benchmark that relies on graphics rather than processor performance. This provides a more positive story for the Spectre x360 16. It reached a score of 3,772 in 3DMark’s Time Spy. That’s roughly double Intel’s best Iris Xe integrated graphics. However, the Spectre x360 16’s score lands it behind the Asus Vivobook Pro 15 OLED, a competing laptop with Nvidia RTX 3050 graphics.

It’s hard to find a positive spin for the Spectre x360 16’s performance results. The Intel Core i7-11390H processor feels like the last gasp of an era of Intel processor design best forgotten.

Graphics performance is better, but not outstanding. The as-tested price of my HP Spectre x360 review sample is barely south of $2,000, which puts it in league with a number of mid-range gaming laptops and workstation systems that deliver better graphics performance. These include Dell’s XPS 15, the MacBook Pro 14, and Asus’ Vivobook Pro models, to name a few.

There is one redeeming factor, and that’s the device’s 2-in-1 design. Want a laptop with RTX 3050 graphics, or better? You have plenty of choice. Want a 2-in-1 with the same? Your options are much more limited. Microsoft’s Surface Laptop Studio is the leader in this category, but it’s even more expensive.

I’m here once again to tell you about a Windows laptop that falls short of its promised battery life.

HP’s specifications state the laptop can offer up to 17 hours of battery life. That’s absurd. I don’t doubt HP managed to coax the laptop into a situation where this was possible, but it seriously misrepresents the real-world experience.

I recorded just five hours and 17 minutes of endurance in our standard battery test, which loops a locally hosted 4K video file until the battery dies. That’s not a great result, but I wouldn’t call it surprising. My review unit’s high resolution 4K display and Nvidia discrete graphics put the 83 watt-hour battery to the test and find it wanting.

Real-world battery life is in line with the test. I believe it’d be possible to achieve eight or nine hours of endurance if you placed the 2-in-1 on a desk and maybe, occasionally, had the audacity to visit a website. When I used the laptop for my actual work, which, is little more than writing in Word and occasionally editing photos, I saw about six hours of endurance.

The HP Spectre x360 16 comes with a light load of bloatware. This includes McAfee antivirus. However, most apps are from HP itself. This includes HP Command Center, which is used to change power profiles, and HP Palette, a photo management app. McAfee aside, the bundled apps were not obtrusive and didn’t change my experience.

The HP Spectre x360 16 is a decent 2-in-1 with a gorgeous OLED display and an outstanding design. It has a discrete graphics card, too—a rarity for convertibles. There’s only one big problem… the processor is obsolete. Intel’s Core i7-11390H was never an outstanding choice and today, with Intel 12th-gen Core processors hitting stores and AMD Ryzen 5000 processors widely available, it’s not suitable for a high-end device. The lackluster CPU performance and battery life makes it fall behind the competition.

In fact, you can already buy the HP Spectre x360 2-in-1 with an Intel Core i7-12700H processor – but only at Best Buy (for now). This model is not available on HP.com. It also doesn’t have Nvidia graphics, which is a bummer. Still, it shows additional 12th-gen Core models are likely to come sooner than later. I recommend waiting for their arrival.

You told us: You have some opinions about buying refurbished phones

Samsung Dex: Everything you need to know