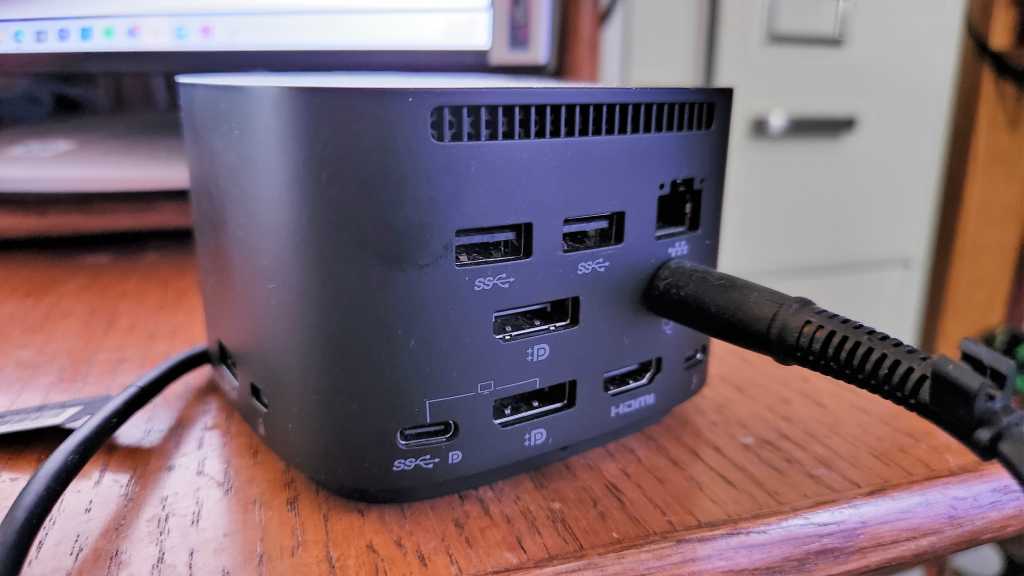 HP’s Thunderbolt Dock 120W G4 Dock (4J0A2AA) is business-focused, meeting NIST 800-193 protocols. But with 100W of charging power at the ready, plus a tidy form factor, any home office could use this Thunderbolt dock, too.

HP’s Thunderbolt G4 Dock is a compact little cube of connections, supplying more than enough power for most laptops. As a business solution, it’s a top Thunderbolt dock.

HP sells two versions of this Thunderbolt G4 Dock: the 4J0A2AA (this model) and the 4J0G4AA, which we haven’t tested. The difference is that thelatter includes a “combo cable” that supplies up to 280W of power via the combination of a Thunderbolt 4 cable plus a barrel charger, for HP workstations. The 4J0A2AA supplies up to 100W to the host laptop via the Thunderbolt cable—still among the highest we’ve seen. Even then, there were no thermal issues at all.

Overall, we’ve ranked this as the best business solution we’ve seen among our best Thunderbolt docks.

HP’s squat little plastic Thunderbolt G4 Dock (3.9 x 3.9 x 2.7 in) feels a lot more solid than its rated 1.68 pounds would indicate, and it sprouts ports to all sides: a 10Gbps USB-C port capable of 15W charging on the front; a 5Gbps USB-A port on either side plus two more on the back, all capable of 7.5W out. The back also houses two DisplayPort 1.4 ports, an HDMI 2.0 port, and a USB-C 3.2 Gen 1 port designed for video. We only tested this dock with two 4K/60 external displays, but it’s capable of driving three 4K/60 displays provided you have a DisplayPort 1.4-capable laptop with Display Stream Compression, or DSC.

There’s also an ethernet port capable of 2.5Gbps, as well as another Thunderbolt 4 port outlet. The ports are crammed together with barely enough space for DisplayPort cables or USB keys, but a couple of the outside ports are slightly skewed outwards to provide more room, a nice touch.

This business-oriented Thunderbolt G4 Dock includes vPro support and the power button/LED can be used to turn itself on and off —but only when connected to supported HP notebooks. The throughput is excellent, meeting expectations on all of the ports. The front USB-C port delivered 15W of power, as the HP’s manual says it should—although, weirdly, the dock lost connection with the displays for a few seconds when a smartphone was connected. We expect a firmware upgrade to solve these issues, and we don’t consider them dealbreakers because of the charging capabilities of the other ports.

When notified of our findings, HP reps said they couldn’t reproduce our results. In any event, HP includes a one-year limited warranty in case the problem manifests itself again.