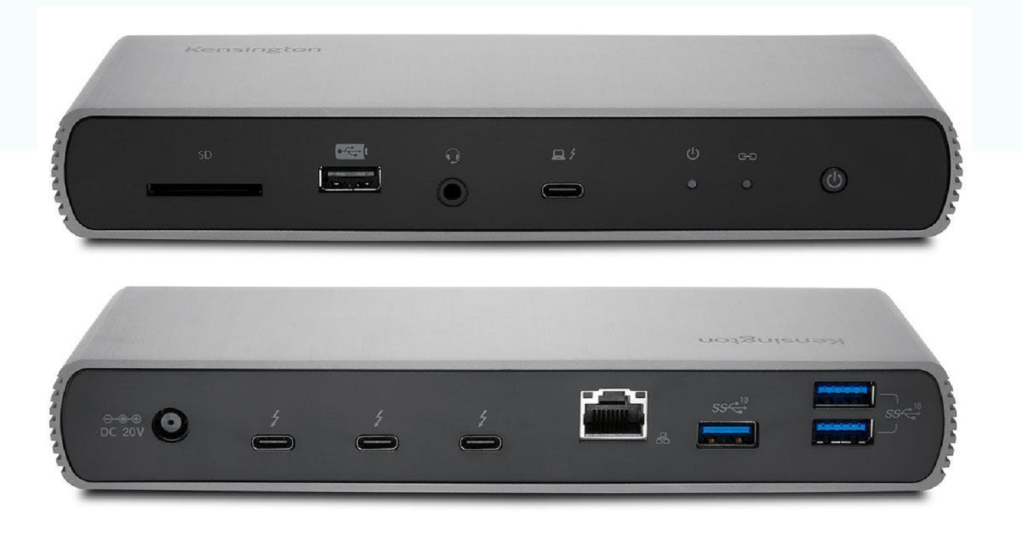 The Kensington SD5700T Thunderbolt 4 Dock is a quality Thunderbolt 4 docking station that boasts 11 ports and a 180W power supply.

A subset of Thunderbolt 4 docks seem to emphasize Thunderbolt connectivity over everything else, and the Kensington SD5700T Thunderbolt 4 Dock falls under that category.

There’s nothing wrong with that, as you’ll be able to daisy-chain other docks and USB-C dongles for extra connectivity, though that’s an expensive proposition. Directly-driven Thunderbolt peripherals, such as SSDs and displays, are still relatively niche products, however. It’s this niche that Kensington’s SD5700T satisfies. Keep in mind, too, that the Mac ecosystem favors Thunderbolt displays far more than PCs, which is what we’re focusing on.

Note: This review is part of our roundup of the best Thunderbolt docks. Got there for buying advice, product comparisons, and recommendations.

That’s not to say that the Kensington SD5700T Thunderbolt 4 Dock doesn’t support more traditional I/O capabilities, however. In addition to the three Thunderbolt 4 ports that deliver 40Gbps of bandwidth (plus 15W of charging power for phones and/or peripherals), there are three 10Gbps USB-A ports (with 4.5W of power delivery) as well as a separate USB-A port (480Mbps, 7.5W) that’s tailor-made for either a mouse or keyboard or just charging a phone. There’s also gigabit ethernet as well as an UHS-II SD Card reader (320MBps) and 3.5mm headphone jack.

The downstream Thunderbolt 4 cable delivers 90W to your laptop, almost certainly enough to charge it. Remember, Thunderbolt 4 docks are backwards-compatible with Thunderbolt 3 devices.

The weakness is, of course, the lack of dedicated display ports. Most external displays used by PCs include either HDMI or DisplayPort ports, and this dock lacks both. You can connect displays directly if the monitors have a USB-C connection. If not, you’ll require either a USB-C-to-HDMI or USB-C-to-DisplayPort adapter (not included) to connect to the Thunderbolt 4 ports. Otherwise you can buy a USB-C dongle to solve this—though that requires spending even more money for what is already a terribly expensive dock.

The Kensington SD5700T Thunderbolt 4 Dock is built sturdily. On the side, as you’d expect from a Kensington device, are lock slots for physical security. You’ll appreciate the lights that show power and connectivity status, plus the On/Off button that can power off the dock when not in use.

This is a forward-looking dock designed for a world powered by USB-C or Thunderbolt. And that’s fine, if you own those peripherals. For everyone else looking to connect legacy peripherals, including displays, you may want to explore a cheaper, more flexible dock instead.

While the original review of the Kensington SD5700T Thunderbolt 4 Dock was written by Simon Jary of TechAdvisor, PCWorld’s Mark Hachman edited and adapted it for the PCWorld audience. TechAdvisor’s original rating has been left intact.