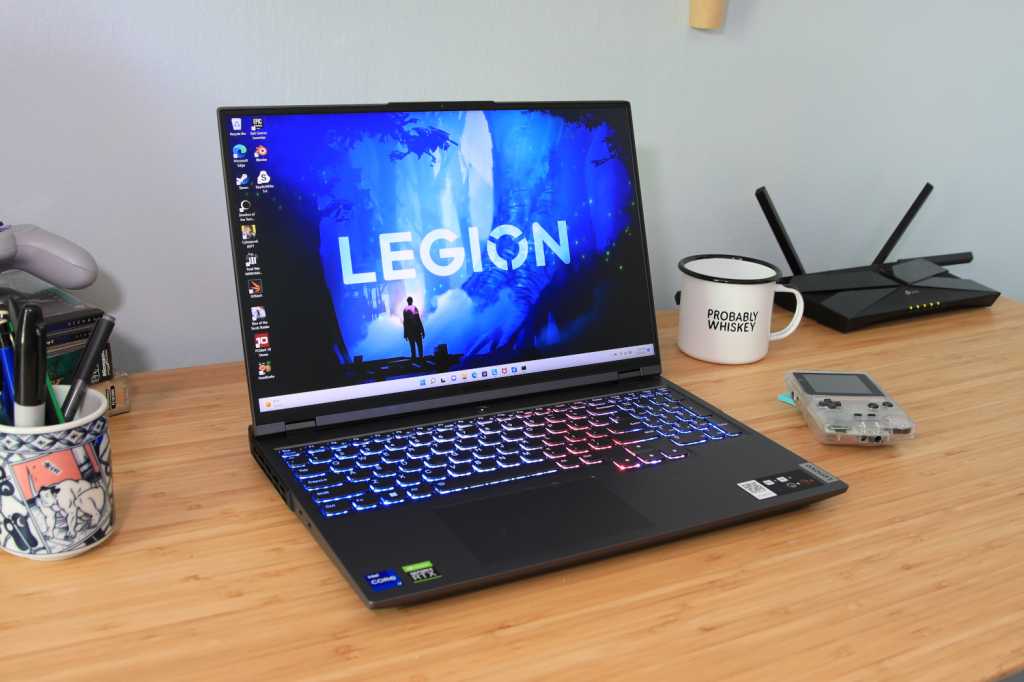 That’s why gamers will enjoy the Legion 5 Pro. It’s not perfect, but it delivers strong game performance at a mid-range price. That’s hard to ignore. Plus, we really like the keyboard and connectivity options.

My particular review unit is sold exclusively at Walmart for $1,999. Lenovo offers a less expensive Legion 5i Pro with Nvidia RTX 3050 graphics and otherwise similar hardware. It retails at $1,399.99. Older models with AMD Ryzen 5000-series processors and RTX 3060 and RTX 3060 graphics are available, as well.

The Lenovo Legion 5 Pro has the look of a gaming laptop when it’s closed on a desk, especially if viewed from the rear. It’s a beefy laptop, measuring up to 1.1 inches thick, and its aggressive lines come together in a girthy rear with big vents and lots of ports. Lenovo tones down the design with a simple gunmetal colorway and unstated logo, but there’s no mistaking this for a ThinkPad.

Open the laptop, however, and the Legion 5 Pro transforms. The display has a 16:10 aspect ratio, thin bezels, and small yet sturdy hinges. There’s no massive vents or large speaker grill, leaving ample room for a keyboard that looks identical to those found on Lenovo IdeaPad laptops.

It’s an intriguing alliance of business and pleasure. The Legion 5 Pro is unapologetically large, a fact you’ll remember when packing the 5.4 pounds chassis. Yet it’s also an approachable laptop when used for productivity. There’s no turbo button or LED-backlight logo to distract you. Function takes priority.

This is a rigid, robust laptop. A hint of flex is visible when lifting the display lid or handling the laptop roughly, but only a hint. Most of the laptop’s touch points are aluminum and touch points, like the keyboard and palmrest, are rock solid. The Legion’s looks aren’t on par with Alienware’s extravagant laptops, but it feels just as durable.

Keyboard quality is a highlight, matching the quality of most Lenovo IdeaPad and ThinkPad laptops. Keys offer respectable travel and activate with a firm yet forgiving action that provides tactile feedback.

I like the layout, which feels spacious despite the inclusion of a numpad. Aside from the Backspace key, which is cut short for the numpad, all keys feel large and easy to find. The Numpad keys are a bit skinny, however, so those who use it frequently might feel shortchanged.

Other large gaming laptops, like the Razer Blade 17 or Alienware x17, either ditch the numpad entirely or provide larger keys. The Legion 5 Pro, which has a smaller 16-inch screen, is more cramped.

The touchpad measures about four and half inches wide by three inches deep. This is a fair size for a laptop touchpad and provides room for Windows multi-touch gestures. The touchpad is quick and responsive, though I would have preferred more difference between the texture of the touchpad and the surrounding palmrest.

The Lenovo Legion 5 Pro has a 16:10 display aspect ratio. Its bezels are slim, as well: a quarter inch along the top and sides and three-quarters of an inch at the bottom. This charges the laptop’s character.

Going for a 16:10 aspect ratio means the display appears taller, and a bit more narrow, than a 16:9 widescreen. This Is an advantage in everyday use. The 16:10 aspect ratio is generally better for multitasking, as you can easily view two documents or web pages side-by-side.

The thin bezels reduce the laptop’s footprint. The Lenovo Legion 5 Pro is a few tenths of an inch smaller than the Alienware x15 and Acer Predator Helios 300, each with a 15.6-inch display. Thickness aside, its footprint is more similar to the Asus Vivobook Pro 16X.

Image quality continues the Lenovo Legion 5 Pro’s practical streak. It’s a matte IPS that serves up 2,560 x 1,600 resolution and reaches a high maximum brightness of 565 nits. The display is usable in nearly any situation.

When it comes time to game, however, it’s less impressive. The display’s resolution is plenty sharp for a 16-inch screen. I also appreciate the 165Hz display, which includes G-Sync support and provides smooth motion. Yet the display is held back by a merely ok contrast ratio of 1210:1, grayish black levels, and a color gamut that doesn’t try to push beyond the realm of sRGB.

There’s an obvious lack of depth, immersion, and saturation. This is noticeable in both bright, vivid games, where colors look muted, and in darker, more atmospheric titles, where a lack of contrast can steal detail from dark scenes.

The speakers are merely passable. They’re loud and clear at lower volumes but become muddy and distorted at higher volume. Perceived quality is impacted by the surface the laptop is on, as well, because the speakers face downwards. They’re fine for a quick game or listening to music at low volume, but more discerning listeners will quickly grab their headphones.

The Lenovo Legion 5 Pro has a basic 720p webcam squeezed into the thin top bezel. Image quality is ok, even in modest lighting, but often appears soft and grainy. An electronic privacy shutter is included and controlled by a switch near the laptop’s 3.5mm audio jack.

The microphone surprises with clear, crisp audio that delivers good volume when speaking quietly or facing slightly off-center from the laptop. The microphone’s presentation has a deep and resonant quality that seems professional. You might not look your best and meetings — but you’ll come through loud and clear.

There’s no shortage of USB-A ports. You’ll find two USB-A 3.2 Gen 2 ports on the back, plus an additional USB-A 3.2 Gen 1 on the right flank. The right flank also has a 3.5mm combo audio jack, while Ethernet is located on the rear.

Video connectivity is up to modern standards. The Legion 5 Pro has an HDMI 2.1 port on its rear and, as mentioned, the rear USB-C Gen 2 port supports DisplayPort. There’s no dedicated DisplayPort output.

This madness makes sense when you see the laptop’s huge power brick. The USB-C port lets you pack a smaller, lighter power adapter. It won’t charge the laptop when gaming but it’s fine for less demanding use.

Wireless connectivity is solid. The Legion 5 Pro supports the latest Wi-Fi 6E standard and Bluetooth 5.1. Wi-Fi download speeds over Wi-Fi 6E are similar to Gigabit Ethernet when the laptop is used in the same room as the router.

The Lenovo Legion 5 Pro I tested was equipped with an Intel Core i7-12700H processor and Nvidia RTX 3070 Ti mobile graphics. It also had 16GB of RAM and a 512GB solid state drive.

PCMark 10 turns in a somewhat lackluster score of 7,146. This is a tad behind other gaming laptops PC World has recently tested. Most of these alternatives were powered by the same Intel Core i7-12700H processor found in the Legion 5 Pro, but the Asus ROG Zephyrus G14 had AMD’s new Ryzen 9 6900HS.

It’s a similar story in Cinebench R20’s multi-threaded CPU benchmark. This demanding workload placed the Legion 5 Pro a hair behind other similar laptops with Intel hardware. It does defeat the Asus ROG Zephyrus G14 with AMD Ryzen 9 6900HS. The Zephyrus is a smaller laptop, however, which takes the shine off the Legion 5 Pro’s victory.

The Lenovo Legion 5 Pro does a bit better in our Handbrake test, as it lands a smidge ahead of the Razer Blade 17 and Asus ROG Zephyrus G14. It’s still behind the Alienware and Asus Strix Scar, however, and by a larger margin than in other tasks.

These benchmarks show a trend: the Legion 5 Pro has a fast, capable processor, but competitors can slightly outperform it.

That’s not ideal, but the real-world impact is questionable. You may notice the difference if you run long, heavy workloads, such as encoding an hour-long 4K video for YouTube. If your most demanding work happens in short bursts, however, the difference will be subtle.

Now, let’s get to the real meat of the performance tests: gaming and 3D graphics.

At a glance, the Lenovo Legion 5 Pro’s 3DMark Time Spy score may seem underwhelming. Remember, however, that this model has an RTX 3070 Ti, while others tested had RTX 3080 and RTX 3080 Ti mobile hardware. The Legion 5 Pro is delivering a lot of value in this benchmark.

The Legion 5 Pro doesn’t fall back in Rise of the Tomb Raider, either. This is now an older title that’s representative of games optimized for the last console generation. It screams at 148 frames per seconds. It’s defeated only by the Razer Blade 17 with RTX 3080 Ti graphics.

It’s a similar story in Metro Exodus, where the Legion 5 Pro once again beats most competitors, though by a smaller margin. Still, this is an impressive result, as Exodus is a demanding game.

The Legion 5 Pro’s game performance is thanks to the RTX 3070 Ti’s high maximum thermal graphics power of 150 watts (125 watts with 25 watts of Dynamic Boost). Lenovo also pairs the laptop with a huge 300 watt power brick. I’m doubtful this has any impact on performance, but it’s larger than the 240 to 280 watt power bricks that ship with competitors, and it charges the laptop quickly.

On balance, the Legion 5 Pro’s performance is solid. It’s not a record-setter but, at a retail price of $1,999, it doesn’t need to be. It merely needs to threaten more expensive alternatives – and that’s exactly what it does.

The Legion 5 Pro supports Nvidia Optimus switchable graphics, which switches the laptop to Intel integrated graphics when discrete graphics performance isn’t called for. This is automatically and usually seamless, though I did notice occasional screen flicker when launching a game.

PC World’s standard battery test, which loops the short film Tears of Steel, drained the laptop in about five hours and 10 minutes. That puts the Legion 5 Pro right in line with competitors like the Razer Blade 17 and Alienware x15 R2.

Your impression of battery life will depend on your perspective. Five hours is expected for a Windows gaming laptop, but not great compared to laptops focused on productivity and way behind Apple’s MacBook Pro 16. You’ll need to bring a power adapter on most trips.

The Lenovo Legion 5 Pro is a remarkably powerful, versatile laptop. Though it targets gamers, the Legion 5 Pro’s wide range of connectivity, excellent keyboard, 16:10 display, and adequate battery life will appeal to many. It’s a great choice for games, photo or video editing, 3D rendering, and other demanding tasks.

It’s disappointing to see Lenovo ship the laptop with an underwhelming display. Games and movies don’t look their best. Audio is also weak compared to alternatives from Alienware and Razer.

These flaws are forgiven by the price. The model I tested will retail exclusively at Walmart for $1,999. That’s less than an Alienware X15 or Alienware X17 with RTX 3060 mobile graphics and beats the Razer Blade 17 by hundreds of dollars. The Legion 5 Pro’s value makes it easy to recommend.