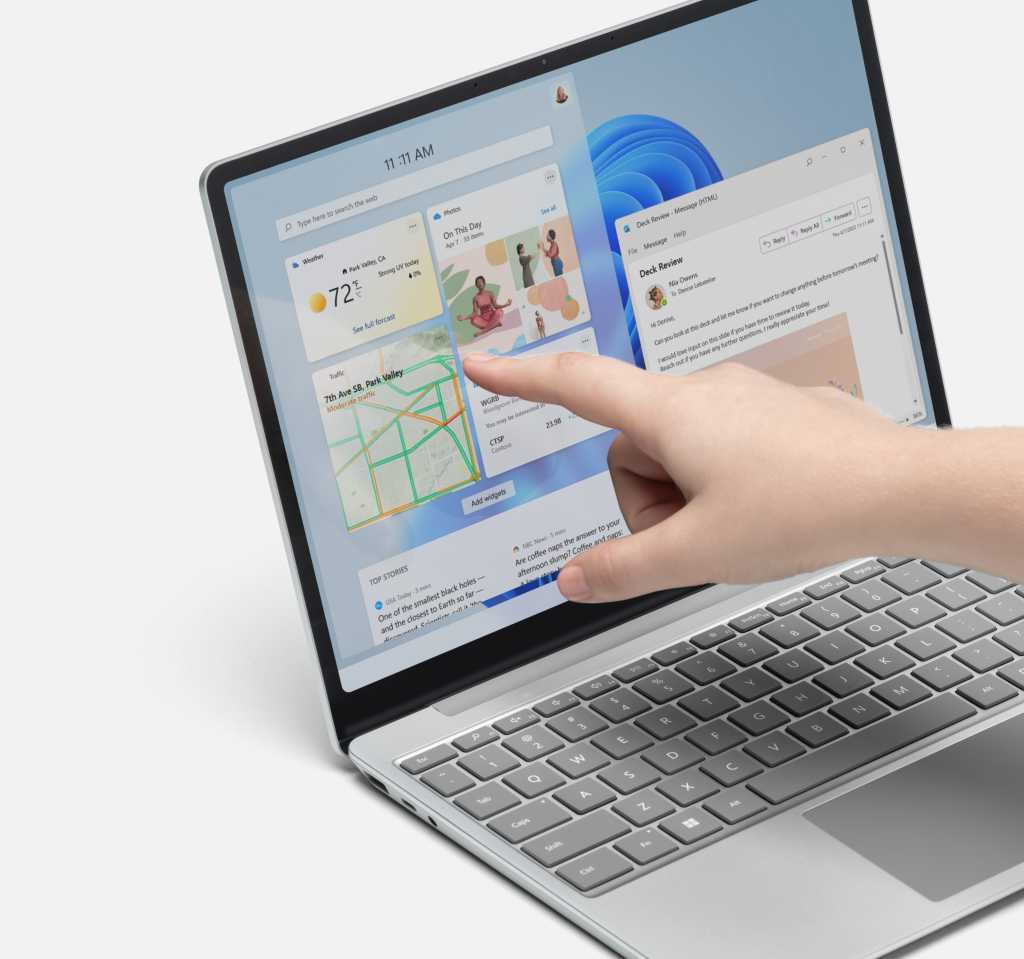 Microsoft announced the Surface Laptop Go 2 on Wednesday, an updated model that goes to 11 by swapping in a more powerful 11th-gen Intel Core processor and a full-fledged Windows 11 install, in exchange for a slightly higher starting price of $599. It’s more repairable, too.

That includes the display resolution — a key question mark with the first Surface Laptop Go. The initial Surface Laptop Go raised eyebrows with its 12.45-inch 1526×1024 (148 PPI) panel, which fell below the 1080p resolution that’s typical for most laptops. On the Surface Go 2, Microsoft specifies the display at a quoted 12.4 inches, but with the same 1525×1024 (148 PPI) as its predecessor. (You can consult our earlier review for some zoomed-in photos of the display, which we really couldn’t complain about.)

What’s changed, however, is that Microsoft has migrated to Intel’s 11th-gen Core chips, specifically the use of the Core i5-1135G7. While we don’t know how the Surface Laptop Go 2 will perform, we have seen the Core i5-1135G7 in competing value notebooks. We’d expect the Surface Laptop Go 2 will directly compete with the Acer Aspire 5. Our review of the Aspire 5 uncovered Core i5-1135G7 performance that falls squarely into the “good enough, but nothing special” camp.

Microsoft also trimmed a 64GB storage option that was available in the Surface Laptop Go. Now, you’ll receive at least 128GB of storage, a “removable” option that can be replaced by a trained Microsoft repair shop. Microsoft has also made the “C-Cover” (the keyboard and trackpad), the “AB Cover” (Microsoft-speak for the display) as well as the battery, “feet” pads, and DisplayLink cable replaceable, helping to extend the lifespan of the device. Interestingly, everything but the battery is characterized as a “customer replaceable unit,” though Microsoft still advises you choose a “skilled technician” to replace it. The battery must be swapped out either by Microsoft or a Microsoft-authorized provider.

The original Surface Laptop Go shipped in the conventional Platinum, plus Ice Blue and Sandstone. Now there’s a Sage option as well, for those who prefer a greener alternative.

One of the Surface Laptop Go’s niftier gimmicks hasn’t changed: the embedded fingerprint reader inside the power button. Sure, we’ve seen similar approaches beginning with Huawei and extending into laptops from Acer and others, but it was still a dependable, useful alternative to the Windows Hello depth camera found in other Surface devices. Microsoft has also included the Surface Connector, too. (The Surface Laptop Go allowed you to charge via USB-C if you wished.)

Here’s a short summary of the Surface Laptop Go 2’s specifications. We haven’t received the available pricing configurations, but we’d advise that you shy away from configurations with 4GB of RAM, if at all possible. If you agree, that will raise the “starting price” to something above $599. You can preorder the Surface Laptop Go 2 today on Microsoft’s site or at BestBuy.com; orders will begin shipping on June 6.

We asked, you told us: You’ve all used your phone’s tele lens as a magnifier