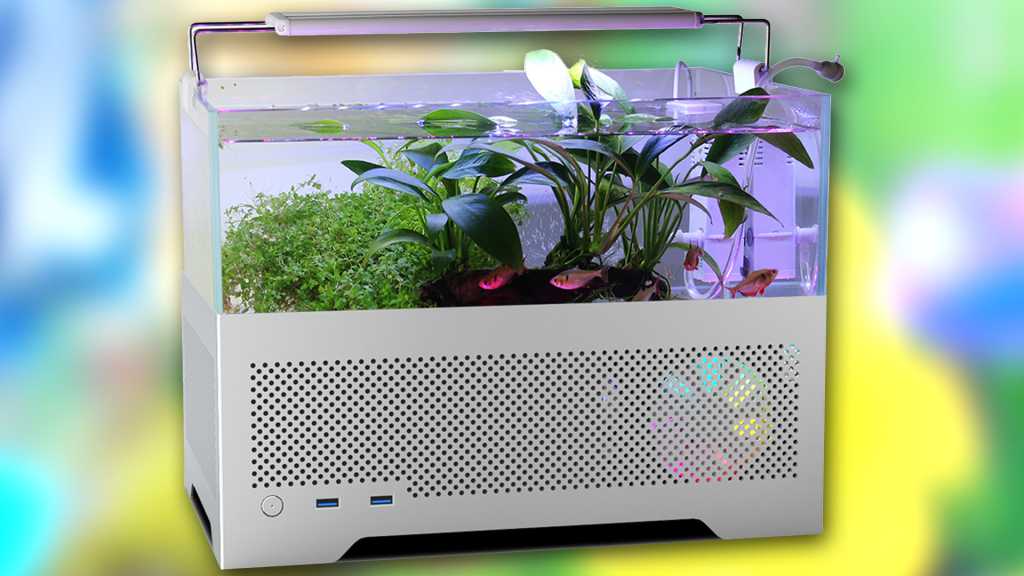 Modern PCs can often be works of art, brimming with carefully selected components, intricate cable routing and custom liquid cooling, and more LEDs than a Vegas casino sign. But if you’re hunting for something a little more unusual and a little less chill, why not stick actual, living creatures inside your computer case? The MetalFish Y2 does just that; it’s a fully functional (if somewhat small) aquarium crammed on top of a Micro-ATX PC case.

Is it wise to put gallons of water and straight-up living fish on top of a chassis full of high-end computing equipment? Wouldn’t it be better for both a computer and the fish to separate these two items into purpose-built components? What kind of consciousness-altering substances does one have to indulge in to think up something like a combination PC case and fish tank? The answers, respectively, are no, yes, and I don’t freakin’ know. Personally I wouldn’t feel comfortable with a device that could malfunction and destroy a valuable computer and electrocute a bunch of pets at the same time, but that’s just me.

The aquarium half of the MetalFish Y2 includes a USB-powered water filter and oxygenator, as well as an overhead LED light that’s meant to supply some healthy UV rays for both your fish any aquatic plants hanging out inside. Even so, with dimensions of just 370 x 250 x 290mm (14.6 x 9.8 x 11.4 inches), only about half of which is taken up by the tank itself, you’ll want to keep the occupants on the very small side. Also note that sticking a bunch of water directly on top of a high-powered PC might create some heat issues for whatever’s living in there — maybe consider a teeny-tiny terrarium instead?

As for the case itself, MetalFish says it will hold Micro-ATX and Mini-ITX motherboards, as well as dual-slot graphics cards up to 220mm long thanks to a horizontal riser. Space for a CPU cooler is quite limited at just 90mm, so maybe don’t plan to scram your next benchmark-busting build in there. The case includes an internal LED strip and room for one, count ’em, one 2.5-inch SATA hard drive or SSD.

According to Tom’s Hardware, you can get your hands on the Metalfish Y2 for under $75 in local currency if you happen to be in China, but the rest of use might have to hunt around for an importer. Or just, you know, build a computer and an indoor fish living environment in separate spaces like a sane person.

Astoundingly, this isn’t the first time someone’s combined the two. In addition to the previous generation of MetalFish design, Lian Li sold an “aquarium” PC case almost 20 years ago. That one was much more of a novelty; while it included a pump and so technically could have held real fish, it was extremely thin, built as the transparent side of a standard PC case. It was marketed with plastic fish inside, and I’ve yet to find any evidence that anyone was cruel enough to put real fish inside it. That design is not to be confused with the “aquarium tank PC build” that was popular a few years ago, suspending PC components in non-conductive mineral oil (with no fish anywhere near it).